It is home to some of Italy's wildest and most unspoilt countryside – a land of mountains and sea. It is an expansive, densely forested and mountainous terrain seamed with waymarked paths, scattered with many tiny hill villages, where olive groves and little vineyards abound and the Italian Riviera lies within a short drive. The English romantic poets came and left their legacy – The Golfo dei Poeti where one can swim and dream in an idyllic Italian sea and townscape.

There are Romanesque churches and historic castles to discover and wild swimming in its rivers and waterfalls.

The historic pilgrim routes of the Via Francigina and the Via Volto Santo pass close by our door and Dante resided in the nearby castle at Fosdinovo where some of his epic poem was conceived.

Nearby places of interest

Our nearest town, 12 minutes away by car, has been called the `Florence of the North` due to its historical connections with the Florentine Medici dynasty. Cosimo Ⅰ de Medici built the walls in 1540 and Cosimo Ⅲ presented the fountain in the central square in 1683.

The town is known for its links with early printing, and Jacopo da Fivizzano started printing books here in 1470 and 1474. There is a museum (Museo della Stampa) to celebrate this and where you can see Mussolini's typewriter in a glass case!!. The town has a lively town square which hosts the once a week market on a Tuesday morning, and has a good selection of bars and restaurants.

There are two large festivals - the Sapori, a festival celebrating the local foods held in early June , and the Disfida, an ancient archery competition commemorating an historic event and held in July. Both exploit the spaces of the town to brilliant effect with Tuscan flag throwing, music and dancing.

Nearby is Verrucola, a beautiful village dominated by its castle. This castle was restored by Pietro Cascelli, a sculptor whose work can be seen within the castle by special arrangement with the owner. You can also see some of his sculptures when walking around the village. We recommend the Ristorante Locanda al Castello for lunch, but get there early as it is popular with locals & visitors alike. 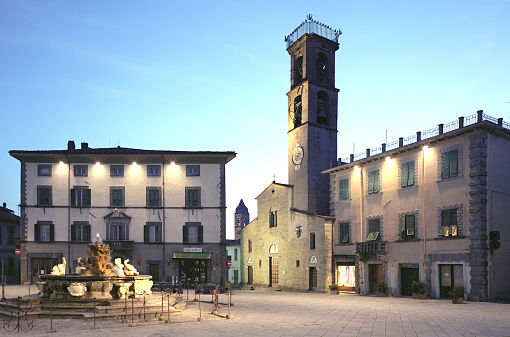 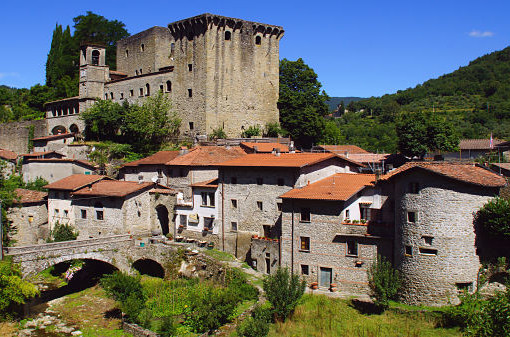 Fosdinova is home to the Medieval Castle of the Malaspina family, which is open to the public for tours. Wander the old streets and visit the churches and enjoy a meal at one of the many restaurants.

Fosdinovo's territory is perfect for walking and cycling; trails lead through forests, castles, churches and villages. The area had strong resistance activity during World War II and beyond the town there is the moving audio-visual Museum of the Resistance. The first weekend in July, the town enjoys the Medieval Festival with colourful displays, music, local food to eat and buy and many craft stalls. The 3rd Sunday of October they hold the Chestnut Festival serving typical dishes based on chestnut flour.

Fosdinovo has ties with Italy's famous Poet, Dante Alighieri who was exiled there for six years. It has been said that he wrote part of the Divine Comedy there. There are stunning views from the Castle, right over to the sea. Go there to enjoy the glorious sunsets.

Our nearest seaside town, about 50 minutes by car, is a gem, and has been called `The Pearl of the Gulf`. Mentioned by Dante and frequented by poets like Shelly, Byron and D.H.Lawrence, it continues to lure writers and artists alike, seeking inspiration. Overlooking the Gulf of Poets (Golfo dei Poeti), with its palm lined promenade, bussy marina and narrow intriguing streets, Lerici is a delight to explore. You'll find interesting shops and many seaside bars and restaurants to dine in. The well preserved 12th Century castle of San Giorgio still stands guard over the town, but now houses the Paleontology Museum.
Ferries can be taken from here to Porto Venere and the Cinque Terre.

A short walk around the curving bay from Lerici leads to the old fishing village of San Terenzo. This is now a thriving small town with its typical jumble of colourfully rendered houses and bars, shuttered windows and domed churches set against a backdrop of hills studded with old villas, it is our favourite place to swim. There is a medieval castle now hosting exhibitions and which offers a panoramic view over the bay towards Lerici.
The English writers Mary and Percy Bysshe Shelley lived here in 1822, in what was then an isolated old boat house called Casa Magni, and on 8th July Percy was caught in a sudden storm while returning by boat from Livorno and drowned. 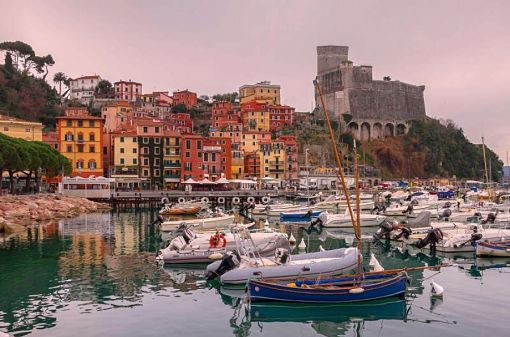 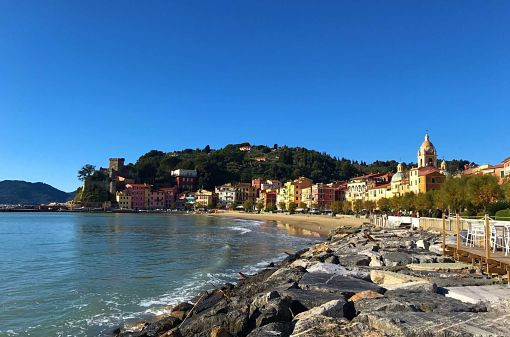 This has to be one of the most beautiful of the Ligurian riviera towns. Being bypassed by the railway it is slightly off the beaten track and is therefore less busy than some of its neighbours.

It has been defensively built with its wall of houses turning its back to the sea, rising to 6 storeys protecting a labyrinth of medieval winding streets behind and dominated by its castle -Castello Doria. The castle was built in 1161 on the remains of an earlier fortification and is said to be a fine example of Genoese military architecture. Today it offers panoramic views over the gulf and is worth a visit. From here one can walk up to ruins and fantastic views over the mediterranean towards the Cinque Terre towns. A promenade has now been built and the defensive wall of buildings now addresses the sea with bars, restaurants and a small marina. Ferries from here can be taken to the Cinque Terre towns and that is the very best way of approaching them. On a rocky promontory at the head of the bay stands the church of San Pietro. Officially consecrated in 1198 and built on the site of a 5th Century church, the black and white striped walls date from the 13th century. The adjacent bay was renowned to be a favourite bathing spot for Lord Byron, and is known today as the Bay of Poets and its crystal clear waters remain as enticing as ever. 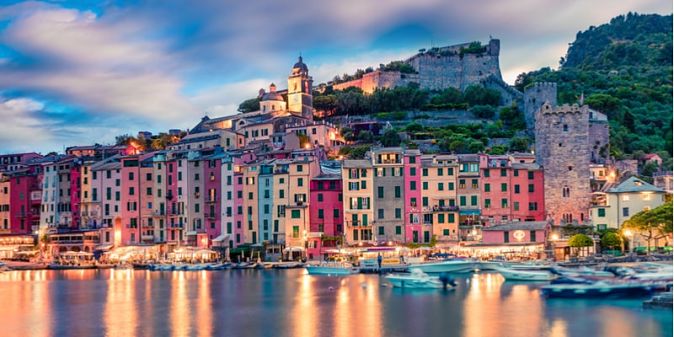 Riomaggiore, Manarola, Corniglia, Vernazza and Monterosso. These are the names of the wonderful five fishing villages of the Cinque Terre, which cling to cliffs overlooking the Ligurian sea. The tall, vibrantly coloured narrow houses seem neatly stacked one on top of the other on the steep and stoney shoreline.

The inaccessibility of these villages was intentional, and they were strategically positioned to deter invaders, pirates and pillaging armies. For centuries, the only way to reach them was by walking a series of narrow mule tracks or by boat. Thankfully, this is no longer the case, but there is still a feeling of authenticity and historical character.

The Cinque Terre is an environmentally protected area and Italy's smallest National Park. Renowned for its beauty, in 1997 was awarded World Heritage status.

People come to the Cinque Terre (literal translation 'the five lands') to admire the perfectly preserved architecture, walk its network of stunning trails and take in the breathtaking scenery.

There are three ways to visit the area and travel between the towns and perhaps the easiest is by train. However the most picturesque is by boat and responds to the fact that, being all maritime towns, they have developed around their harbours addressing the sea. To visit by boat, you can take a ferry as they run regularly from Lerici, La Spezia and Porto Venere, and the latter is our favorite destination to take a ferry. The town itself is magnificent and worth visiting. Fortified in the past due to its strategic location it boasts a fine clifftop fortress - Castello Doria, a labyrinth of tiny lanes protected by a wall of narrow towering houses and the fine Gothic style church of San pietro which sits atop of a rocky headland.
If you choose to go by train, regionale trains leave from Aulla approximately every hour to La Spezia Centrale and there is ample parking at the station. The journey takes 33 minutes. From there the '5 Terre Express' is the most comfortable way to move around the Cinque Terre, with trains as frequent as every 15 minutes.

Riomaggiore is the first of the five coastal villages. Squeezed between two terraced hills, which descend steeply into the sea below, the ancient village strikes the visitors with its vertically built, delightfully colored houses. A botanical garden and bird watching center sit on a rocky promontory overlooking the sea. From the castle you can enjoy magnificent views of the village below which was built in the 1200 to protect the inhabitant from the constant invasions of pirates. 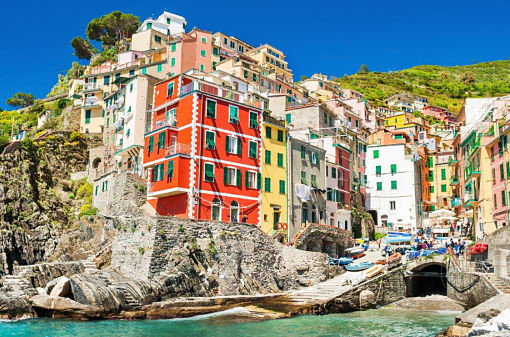 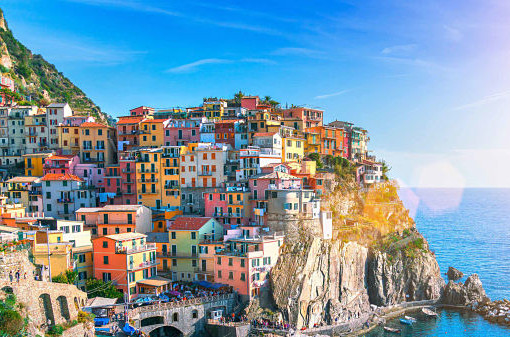 Connected to Riomaggiore via the Via dell'Amore, Monarola boasts the most vineyards in all the Cinque Terre and is particularly known for its production of Sciacchetrà, a sweet dessert wine. The bustling main street and waterfront promenade are reminders of everyday village life.

Located on a rocky promontory 100m above the sea and surrounded by vineyards, Corniglia is the only village that lacks direct access to the sea. Be prepared to climb 377 steps up to the village on a staircase built into the cliff face. Your effort will be rewarded, as it is the only point from where you can photograph all five villages at once. 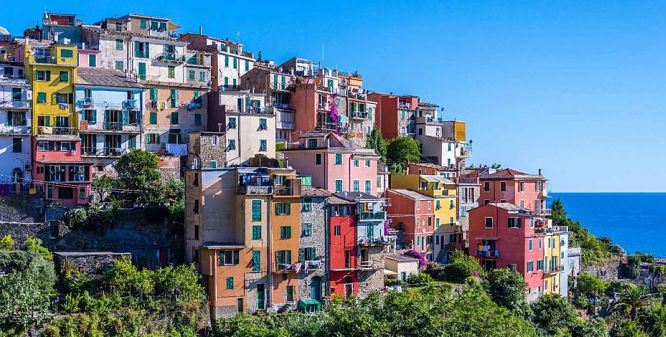 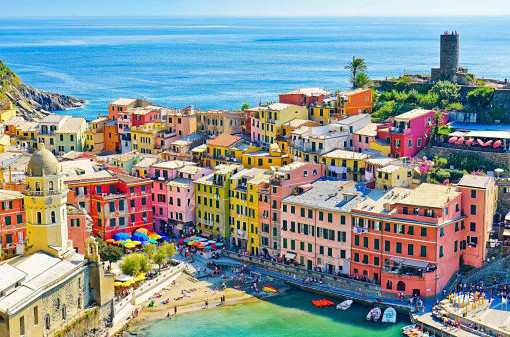 The Jewel of the Cinque Terre. Blessed with a natural harbour, pastel coloured houses and seaside piazzetta, Vernazza is probably the most beautiful of the Cinque Terre villages. The gothic Church of Santa Margherita, the Doria Castle, leaning towards the sea, and the Torrione di Vernazza, opposite the castle, all deserve a visit.

The westernmost town is Monterosso al Mare, the only village that has a proper beach, which in the summer months fills up with sun loungers and Italians working on their tans. Surrounded by vineyards and olive groves, the scenery of Monterosso is dominated by one of its towers overlooking the sea, the Torre Aurora, located on the hill of San Cristoforo. The adjacent Church of San Giovanni Battista was built out of alternating rows of white marble and dark-green serpentine stone, creating a strikingly striped facade. 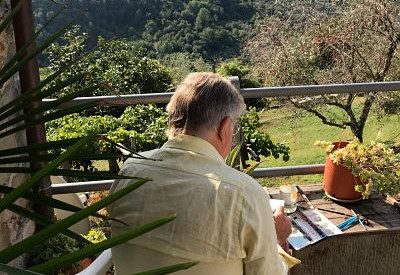